His skill as a professional entertainer has seen him travel the globe and he has performed with major musical companies in principal roles throughout Australia and Asia.  He has shared stages with: Jon English, Jon Stevens, Angry Anderson, Dennis Walter, John Farnham, Kate Ceberano, Russell Morris, Julie Anthony and John Waters.

David was nominated for ‘Best Supporting Actor in a Musical’ for both a Green Room Award and a Mo Variety Club Award for his critically acclaimed performance of The Mikado. Recently David was nominated for a ‘Best Supporting Actor in an Opera’ Green Room Award for his outstanding performance of Sir Joseph Porter in HMS Pinafore.

David was a contributing comedy writer for ‘The Comedy Company’ and played the role of Marcus Teague on Channel 10’s Neighbours and Sergeant Terry on Sea-change as well as roles in several ABC television dramas and comedies. He has toured Victoria with his stand up comedy show ‘Good Evans’.

Covid presented the most incredible opportunity for him to pivot his skills and train as a marriage and funeral celebrant. All of the skills he has acquired along the way in all of his various careers, make David very well versed for any situation, as he is a natural on the stage and in front of crowds.

David is excited about your day and cannot wait to tell your story in a personal and meaningful way. 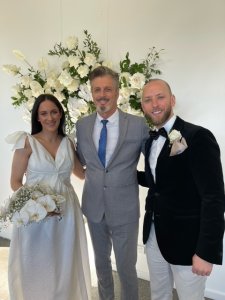